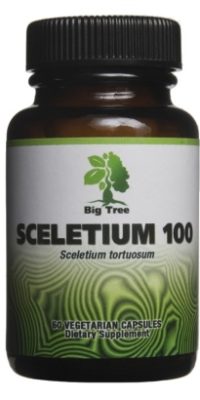 HISTORY AND TRADITIONAL USE

Sceletium tortuosum is a rare succulent from the Mesembryanthemaceae family and is distributed in certain semi-desert areas of Southern Africa. It was (and still is) highly regarded and sought after by both the Khoikhoi and the San (bushmen) people who have used this plant as a mood enhancer since prehistoric times. It has also been used as an appetite suppressant and mental and physical endurance enhancer by shepherds and hunters walking long distances in arid areas.

Sceletium elevates mood and decreases anxiety, stress and tension, and functions as a model anxiolytic (anti-anxiety substance), as well as being a very effective antidepressant (it is believed to function as a natural SSRI – selective serotonin reuptake inhibitor). Sceletium is known to reduce addictive cravings particularly with regard to nicotine and also lessens the withdrawal effects of alcohol and other addictive drugs. It also helps balance aberrant brain chemistry caused by the effects of serotonin-depleting drugs.

Due to its ability to stimulate feelings of empathy it has been used with success in couple and family therapy and is a useful adjunct to therapy in general. Sceletium has a unique ability to bring about emotional balance and simultaneously cause both relaxation and stimulation of a positive mood. Sceletium has also been used as a natural supplement for low mood, including grey weather syndrome, anxiety states, including social phobia, irritability in menopause, improvement in libido and post-traumatic stress disorder. A unique feature of Sceletium is its ability to release and liberate energy by relaxing the habitual mental tension that many people suffer.

Although there have been no confirmed reports of drug interactions, the neuro-receptor activities of Sceletium suggest that there may be interactions with other psychiatric medications and cardiac drugs. People taking any psychiatric drugs (including all anti-anxiety drugs, sedatives, hypnotics, anti-psychotics and antidepressants, including MAO inhibitors, and particularly SSRI’s) are advised to not take Sceletium-containing products.

Please consult your health care professional before replacing any pharmaceutical antidepressant with Sceletium. When used at the recommended dose there are no documented side-effects. In large doses Sceletium can cause euphoria, but this is easily managed by reducing the dose. Do not use during pregnancy or while breastfeeding.

Suggested Use: 1 capsule twice daily or as directed by a healthcare practitioner.
Do not use during pregnancy or while breast feeding.

Organically grown without the use of synthetic pesticides, herbicides or chemical fertilizers.